You can, in fact, eat your way through Spain, with Seville food. If you’re interested in exploring this Andalusian city through this method (why not, right?) this is the guide for you.

There’s no shortage of delicious and diverse options; you’ll be glad to eat yourself silly experiencing the city through culinary adventures.

Olives and ham {all over Spain} are at the top of my list. I don’t normally sit home and chow down on an entire bowl of olives. I certainly don’t touch ham much either on a day to day basis. But it’s a must in Seville if you’re not a vegetarian. The ham is so buttery and flavorful you’ll be tempted to take home the whole leg. The olives are unlike any you’ve ever tasted. Both are staples in the region.

If you saw the photo below before reading this text I know what you’re thinking, “What is that worm looking thing piled on this dish?” And it probably doesn’t look appetizing. But it’s delicious.

It’s actually full of fish protein and has a really mild flavor.

The sauce it’s paired with is what gives it a defining flavor. It’s an imitation of angulas, which is baby eels. The “fake” variety is pressed fish. (Which is more comforting in my mind especially because you’re not eating a fish with eyes, like the baby eels have.)

We had it served on top of a piece of tuna, both with a generous helping of seasoning and olive oil.

This country makes a mean cheese. I had fresh burrata at one market and baked brie at another restaurant later that night. (Excuse me while I wipe drool off my face.) Manchego cheese was another type we ordered often. It’s plentiful there!

Spain’s famous omelettes aren’t what an American considers a breakfast delight. Spanish omelettes are more like a potato and egg pie.

Different restaurants will prepare it slightly different ways and present their own take on it. I’ve never met a Spanish Omelette I didn’t like!

I went to a food market (Mercado Lonja Del Barranco, pictured below) and saw an entire stand for Spanish Omelettes and salmerejo types! I had a mushroom Spanish omelette slice and side of classic salmorejo, an Andalusia and Seville food specialty.

This unique soup is a mixture of tomatoes and bread pureed into a thick creamy, cold, delight. It’s a little like a twist on gazpacho.

We enjoyed a few versions on our trip. My favorite was a garlic cauliflower variation. Mercado Lonja Del Barranco (food hall with plenty of Seville food mentioned above) had a station for Spanish omelettes and a lot of salmorejo varieties, pictured below.

I wouldn’t normally eat sardines. (The fishy flavor is sometimes too much for my palette to handle.) But somehow the Spanish make them more appealing than anywhere else I’ve had them. I always figure, “When in Rome!” so I like to be a little more adventurous when I travel.

I had such a delicious crostini at the Mercado Lonja Del Barranco I could have had several more. It’s a type of potato salad atop a crispy slice of bread, finished with three “rolls” of sardines filled with three different condiments. (Potato salad was also popular in the region.) I’ve only seen this food prepared this way in Seville.

This dish blew me away! It’s a bit of a conglomerate; ham is rolled with cheese,  breaded then fried. Holy crap – is it DELICIOUS.

Our favorite was at Ricardo’s restaurant, a hidden gem with loads of Seville foods that seemed popular amongst locals in Andalusia.

How I love thee so! I enjoyed this for breakfast so often on vacation eating my way through Seville I looked up how to make it at home. Tomatoes are grated on a cheese grater to make a pulp the you can spread on fresh bread. (It’s not blended or puréed – it’s specifically grated.)

I opted to always finish it the classic Spanish way: with an olive oil drizzle, a sprinkle of salt and occasionally fresh pepper.

I’ve loved making it at home since discovering it in Seville. (And loved having it in Barcelona on a subsequent trip to Spain.) 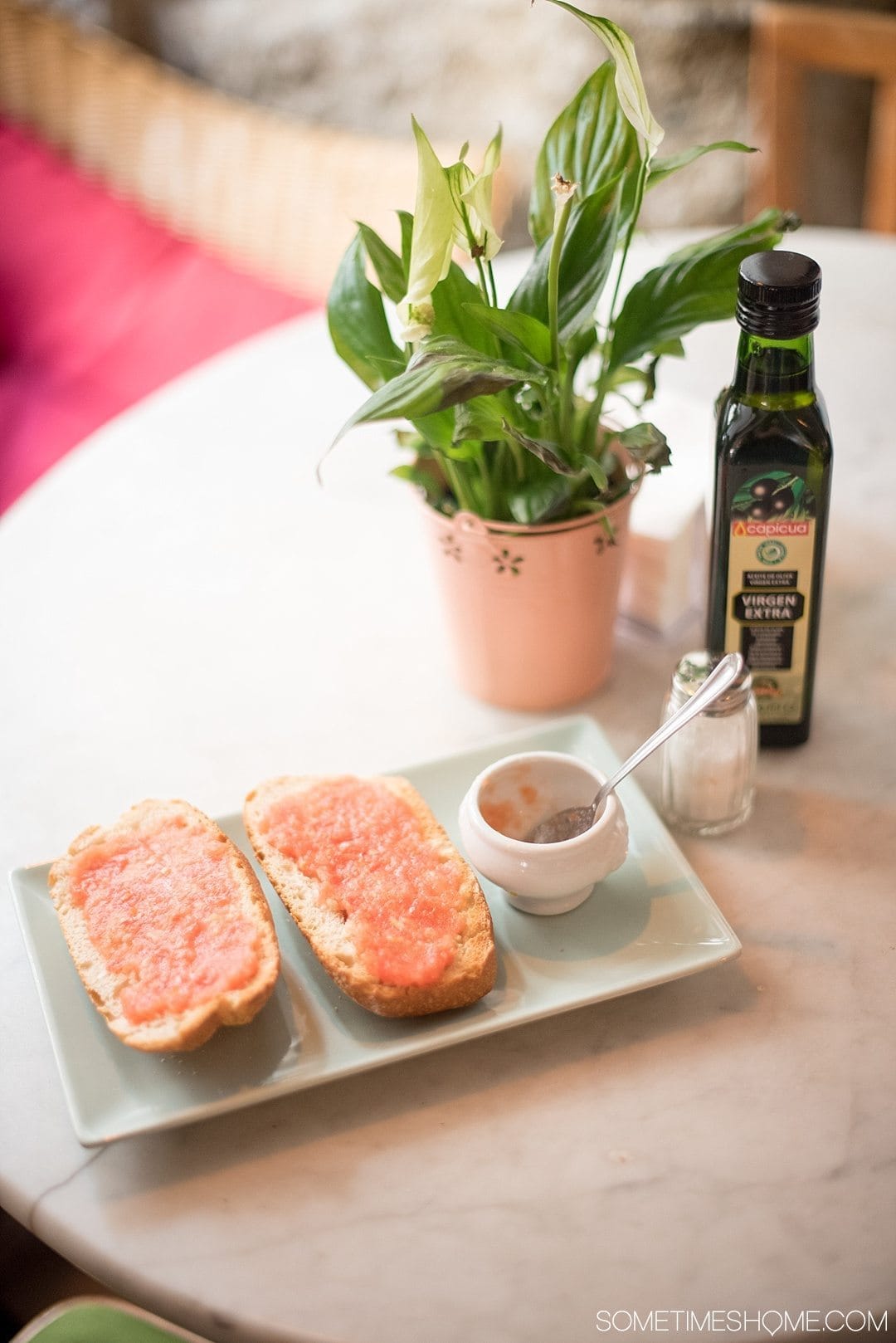 Tuna, Many Ways, in Seville

One of our favorite stops on Seville food tour was a tuna restaurant, called La Almadraba Abaceria.

They serve tuna multiple ways from cubed and skewered, to dehydrated and cured, to marinated and more. I never realized you could prepare tuna in that many ways.

One of the most popular dishes in all of Spain is croquettes. The most common type is ham. These had ham and cheese in them and were pretty much to die for.

You can see the cheese wanting to escape! It’s saying, “Eat me!” (We obliged.)

This is a lot like home fries in the United States. Who doesn’t love good diced and fried potatoes now and then? Especially if you’re enjoying too much vino and need starch to soak up the alcohol. We had it a couple of times at different restaurants and each time was served with a yummy gravy.

Of course you’ll need something to wash all this amazing food down with. The wine and beer flows a-plenty in Seville, is very affordable and satisfying every time. So…bottoms up!

Cheers to Eating Your Way Through Seville Food and Cuisine

The great thing is most of the time all of the dishes above are served tapas style (small plates). I’ve found this to be true all over Spain, especially in Andalusia, the region where Seville is. So that means you’ll be able to try a little of everything without getting too stuffed! Besides you can walk around seeing sites to walk it off between restaurants and food markets.

Which of these dishes is most appealing to you?