There’s so much to do in Canada in Wendake Quebec. It’s just about twenty minutes from Quebec City and a lovely destination for a two day trip. There’s so much to do there in 48 hours – including various experiences, seeing beautiful sites, eating great food and staying at a 4-star hotel – you’ll definitely want to be there at least two days.

Overview of the Wendake Quebec Community

The Wendake community is where many Huron-Wendat Indigenous people live. They’ve been there for centuries (just like the Tlingit people in Alaska), persisting to live peacefully with the the French who came to town in the 16th century, with Jacques Cartier in 1534. It’s a vibrant community that very much keeps the Indigenous culture and traditions alive.

Quebecers speak French, so that’s the language most notably spoken in the Wendake Community. Most people also speak English and Wendat (an Iroquoian language) is taught in schools nowadays to help keep that part of their culture alive.

You’ll notice street signs in Wendake Quebec are in both Wendat and French. (As an American I never heard Wendat being spoken however we learned that many people do speak it and it is taught as well.)

We were there on a trip with Tourism Autochtone Quebec, whose mission it is to reinforce, promote and preserve the culture and traditions of the 55 First Nations and Inuit communities living in Quebec.

How to Get There

It’s a very simple to arrive to the Wendake community in one of two ways:

Personally we would opt for the public transportation option since the city is incredibly walkable. You don’t need a car there at all!

The place to stay in Wendake Quebec is Hôtel-Musée Premières Nations. I walked in and felt comforted by the warmth of its design and furnishings and fell in love with the scent of wood-burning fire places. It’s where “tradition meets modernity” and everything is inspired by or crafted by Indigenous people.

It could be as affordable as $125 a night to stay here or you can choose from a variety of package options on their site. They have beautiful rooms with Indigenous art throughout the lobby, hallways and rooms.

I treasured learning about an Indigenous artist named Norval Morrisseau (also known as Copper Thunderbird) who lived from 1932 to 2007. This “Picasso of the North”, as he was sometimes called, has two thick-lined, black and white paintings are prominently displayed on your immediate right when you walk into the hotel.

There are several open fireplaces in Hôtel-Musée Premières Nations. One is upstairs on the main floor’s lounge area. It’s warm, cozy and inviting with several chairs and couches.

Note that real fur and taxidermied animals are in many places in the hotel. It’s a part of the culture for the Indigenous people, having lived off using all parts of animals throughout history. They are honoring the animals, not exploiting them, but we do feel it’s important to mention.

This Wendake hotel has a beautiful spa too! They offer day passes and treatments, such as facials and massages.

There’s no shortage of things to do here! Here’s a few great ideas, all within walking distance of the hotel:

Starting here will give you historical background into the area and community you’re visiting. I was incredibly interested in the artifacts there and the regalia and jewelry the Indigenous people have worn throughout the years. There’s a fantastic timeline of the Indigenous First Nations in relation to the area inside the museum as well.

If you opt for a guided tour you’ll be able to ask questions for an enhanced understanding of the Wendake community and the region as it pertains to Quebec First Nations and their relationship and history with Europeans.

Gaze at the Huron-Wendat Fresco

It’s just a walk away from the hotel to an overpass, where you can safely stand on the sidewalk and look down on this pretty mural. It was painted by two artists, Manon Sioui and Francine Picard, depicting the history of the Huron-Wendat Nation.

A recurring motif you’ll see many times in Wendake Quebec is a turtle. This is because the continent is said to have formed from the back of a turtle shell.

This waterfall is over 90 feet tall and is called, “Kabir Kouba,” or “The river of a thousand meanders.” The fall ends in a beautiful canyon where you can safely walk along a pedestrian pathway and stairs in the Parc de la Falaise.

Admire the Fountain at Place Onywahtehretish

This fountain honors the myth of creation of the Wendat people. The turtle takes center stage, as the continent was created from his back. Also depicted is an otter, beaver, muskrat and toad; they all sacrificed their lives to save the Mother of Creation when she fell from the heavens. It’s a wonderful place to sit and read a book or enjoy the mist coming off the fountain for a while and meditate.

There is a prominent church in Wendake Quebec that you’ll notice as soon as you enter the community. Though there’s a wooden plaque at the church notating the mission was established in 1697, the current church has been there since 1730. Its inspiration was drawn from Santa Casa de Loreto in Italy.

This home is where three Grand Chiefs and several important politicians and community activists of the Huron-Wendat community lived for over 170 years. Construction began in 1807 and was completed in 1820. The last time a chief lived there was in 1993. “Tsawenhohi” was the name of the first Grand Chief to live there.

Guided tours of the home are available from the Huron-Wendat Museum.

Hear Myths and Legends during Storytelling in a Longhouse

One of my favorite things was listening to stories of the First Nations as told by a wonderfully eclectic Indigenous woman. She is native to the northern Inuits, but has lived in Wendake Quebec for many, many years.

The longhouse where storytelling is, is merely steps away from Hôtel-Musée Premières Nations and Musee-Huron Wendat, where you can book the activity. Inside there are three fires burning and theatrical lighting to add to the intensity of the stories.

English stories are at 6:00pm (French at 9:00pm) and the cost is 37$ per adult and 18,50$ per child from six to 12 years of age. Under 5 years old is free. I didn’t go with any children and I enjoyed it immensely! Included in the price is delicious labrador tea and bannock traditional bread.

The storyteller brought artifacts to show us and even used a drum as part of her myths and legends telling. It was so cool to see her dry the drum skin over the flames until it became taut for her to play.

Flashback to Years Past at the Huron-Wendat Traditional Site

Much like Americans may visit Williamsburg villages in Virginia to learn about American history, you can visit a traditional Huron-Wendat village in Wendake. You gain an understanding of the reliance on the true sense of “community” at the site, with a first hand look at how they smoked meats and fish in the 17th through 19th centuries, and how they slept in longhouses. They have a great gift shop here too if you’re looking for souvenirs to bring home.

We recommend a guided tour. You’ll learn so much more about the traditional site this way, including the culture of the Huron-Wendat people from food, to masks and boat making, and lifestyle then and today. 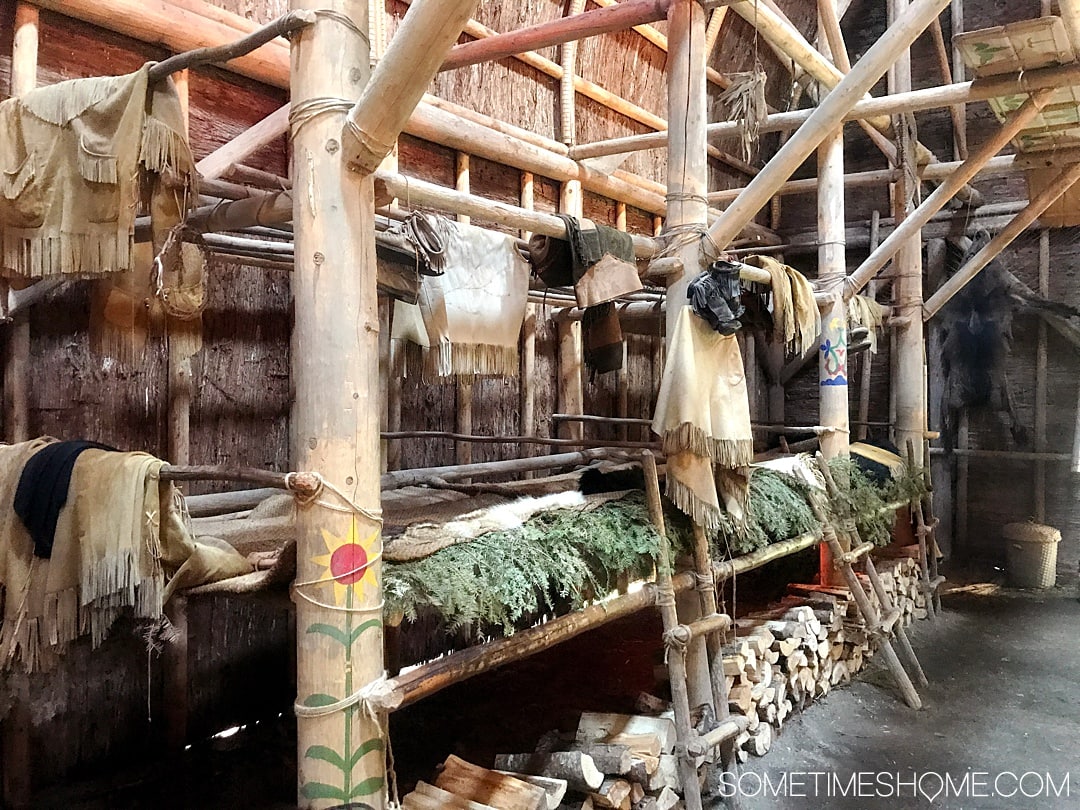 We enjoyed eating at La Traite restaurant several times in 48 hours; it’s just that good and is conveniently located in the Hôtel-Musée Premières Nations hotel. The name is derived from “The Trade” with the Europeans for things like spices and furs. They are open for three meals all days of the week, with a Sunday brunch option on the weekends that is phe-nom-en-al! There is also traditional live Indigenous music at the restaurant each Sunday.

The best way to access the restaurant is from this attractive staircase that connects it with the hotel lobby, near the indoor entrance to Musee de Huron-Wendat. 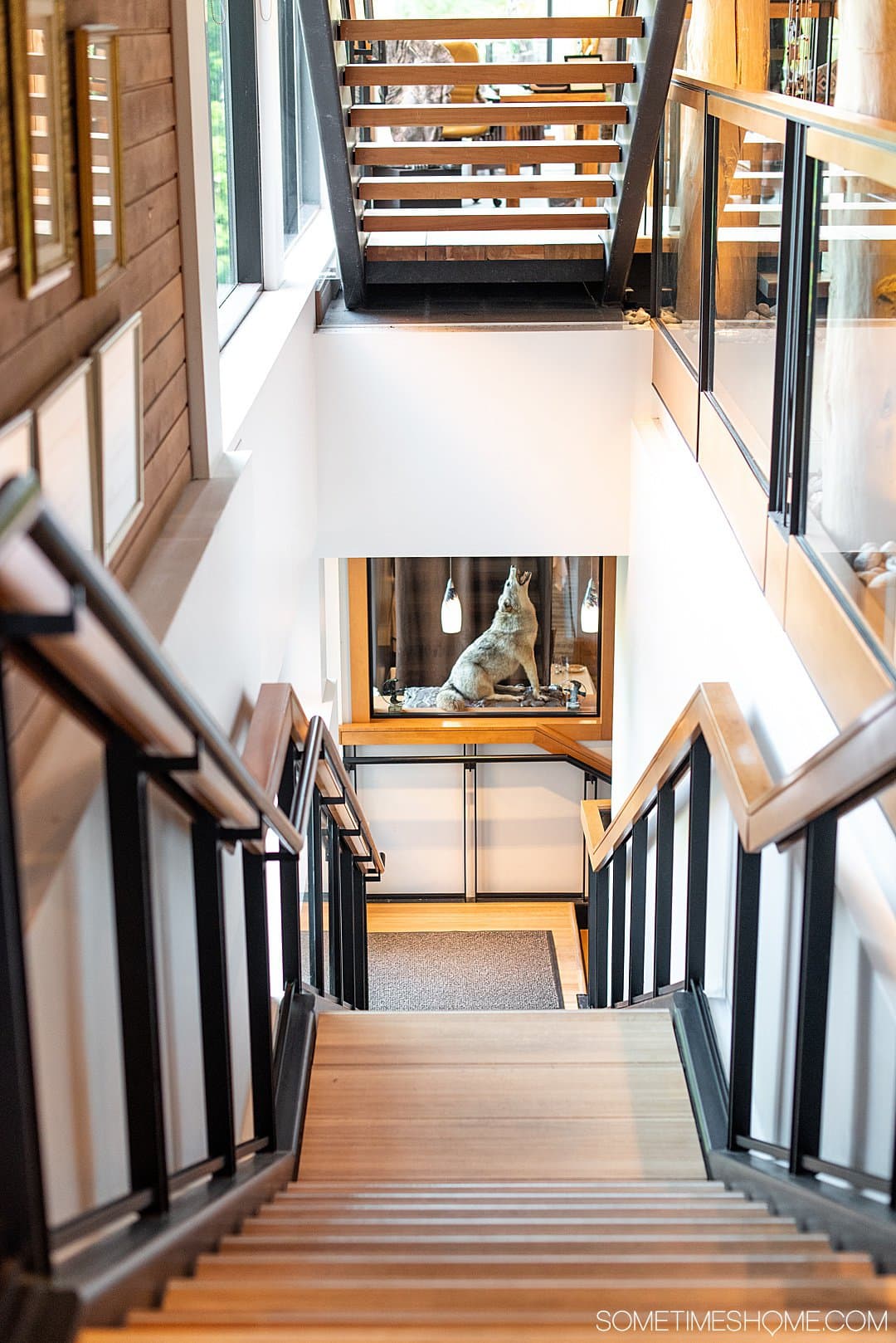 The day I arrived I felt a bit hungry around 5:00pm before my dinner reservation. I had a bit of the traditional bannock bread (which was incredible) and a Kwe beer, a local brew. (“Kwe” is an informal way to say hello in Wendat!)

All meals are prepared using as many local ingredients as possible. They even smoke their own fish! Their cocktails are also delicious. We recommend coming hungry for a complete meal, from drinks to dessert! If the weather is favorable they have an outdoor patio. But there’s also a lovely indoor restaurant and poor if that suits the weather or your dining desires more. There’s another wood fireplace inside the restaurant as well.

We hope we’re lucky enough to find ourselves back here one day. It was one of the most memorable weekends we’ve had in a while and we feel very strongly about supporting Indigenous cultures and preserving their history. We hope you do too!

Please note: we thank Tourisme Autochtone for generously hosting us. All the opinions in the post are ours and we bring you genuine content with real facts, photos and thoughts. Always.

Heading to Quebec? Also check out:

Have you been to an Indigenous community? Comment below and let us know!