I was reluctant to study abroad anywhere but Europe during my college years. I grew up with a an older sister who raved about her experience in Florence, Italy. My mother and I went to visit her and toured the top hits in Italy from Rome to Venice, Florence and Milan during her time there.

Three years later I’d hope to do the same and study abroad somewhere European and fabulous. Much to my dismay I found out my program only offered one option to study abroad: Costa Rica. It was a country I knew nothing about but it ended up being the best restriction possible. I quickly fell in love with this incredible nation and all it had to offer.

I definitely wouldn’t have chosen Costa Rica if given a choice. I simply wasn’t educated about it and had no idea what landscape it offered or what the people there were like.

I’m not sure I even knew it was in Central America at the time. Friends at other colleges were signing up for “sexier” programs like studying abroad in London and Australia. Why was Costa Rica my only option? (Alas, it was all the program I was in offered, which was certainly better than nothing!) 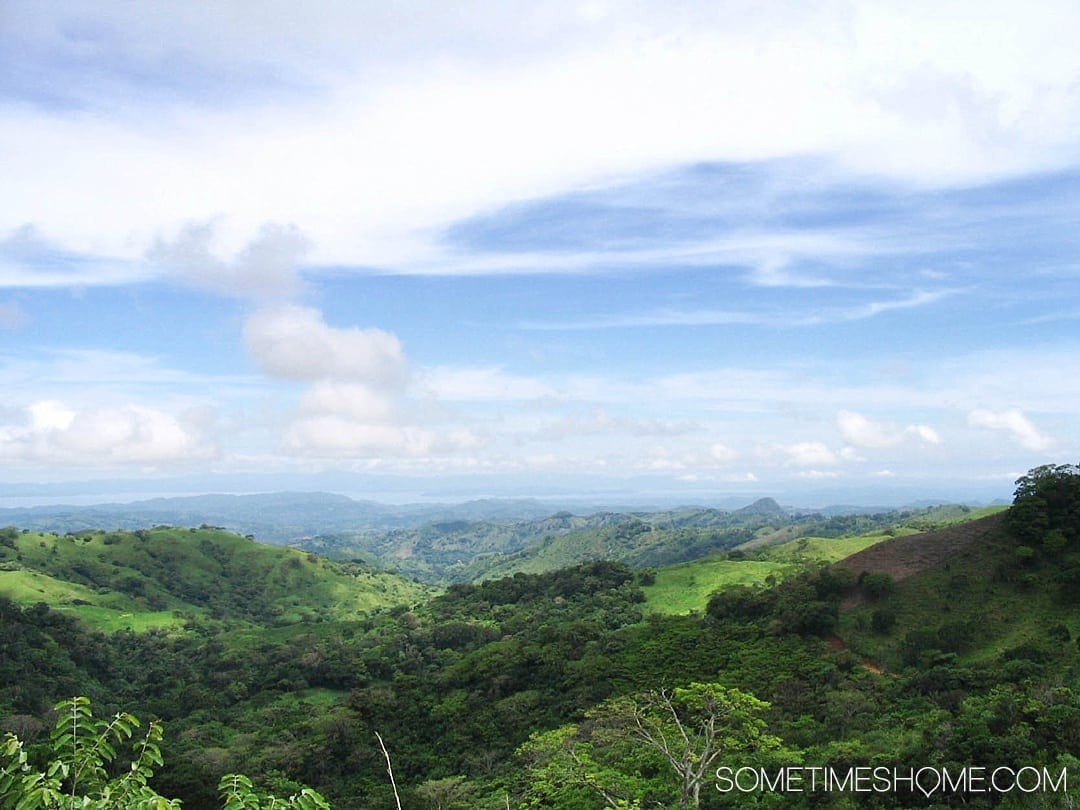 I was enrolled at the University of Maryland (UMD), in a four-year Landscape Architecture program. The program was something I started after I transferred from another school in New York, my sophomore year. Thus I was already “late” to the program, which meant I would graduate in my fifth year of college, not my fourth. I wasn’t happy about this when I learned of the additional time (and money) I’d need to dedicate to my schooling. Yet, the program was so perfect for me…I proceeded.

Landscape Architecture was (and still is) a very small and select major at UMD, with about 20 graduating students per class in a university of over 40,000 students. Thus, classes were given sequentially and there wasn’t an option to double up on courses or studios we had to participate in to cut down on the four years. There was ONE exception to this: if you studied abroad between your third and fourth years you could do your second semester, fourth year studio ahead of time in Costa Rica.

Not only would this option allow me to graduate in four and a half years, but it was substantially more affordable for me than another semester at UMD, paying out-of-state student tuition. (I will be paying off student loans until at least 2050, the out-of-state tuition is that crippling.)

The Program in Costa Rica

The amount of time we would be in Costa Rica was ten weeks. We’d have two sessions in that time separated but a few days off to explore the area.

Monteverde Institute was the name of the university we’d be at everyday. It was a small school with a series of just a few buildings. Our studio was gorgeous and I felt like a Care Bear: we pretty much worked in the “clouds” amongst the cloud forest that is that city each day.

The program consisted of 18 American students who were in one of three areas of study: Architecture, Landscape Architecture, and Urban Planning.

We lived in a “home stay” program, which meant we were each assigned a local family and lived with them. The language barrier was interesting! I don’t speak Spanish and my “parents” there didn’t speak English. They had two children we could communicate through, a daughter who was ten years old at the time and a son who was eight. It was great for them to practice their English; I tried to learn Spanish the best I could in a short amount of time.

Getting to school was simple and beautiful: we walked! The person who lived the furthest away would start his or her walk early in the morning and pick up the people who lived along the main road as we all drew closer to the school. The dirt road (which was often muddy during rainy season) took us past some incredible landscapes each day.

Our weekdays studying abroad in Monteverde, Costa Rica were filled with Spanish language classes and working as students in a beautiful studio in the garden of the institute. Our projects were things that would help the community we lived in, such as a traffic study that aimed to improve traffic flow and signage in the town. Whereas I heard about friends’ experiences studying abroad who said classes were a joke and they lived there to travel the area and attend class occasionally, we worked really hard. We were only able to travel on the weekends if we finished our work; classmates and I worked a few weekends as needed to finish projects.

We had a week at the start of the program to get acquainted with one another and the area, touring places like Arenal and Playa Manuel Antonio on the way north to our new home for the next few weeks. We moved in with our families when we arrived to Monteverde and got situated there. Our “group leader” was with us for the duration of our study abroad program and he was our advocate. It was helpful he was a Costa Rican citizen who spoke perfect English and, of course, Spanish.

After four weeks of studying and focus on a project we had a week off in which my family (mother, sister and aunt) came to visit. Then we started another “semester” and a new project.

It’s a magical place. It’s classified as a “cloud forest” region in the northwest of Costa Rica. Unbeknownst to me when I signed up for the study abroad program I was living out a childhood dream… I used to do my own reports on the rainforest as a grade school child. As in reports no one assigned to me but myself! That’s how much I loved learning about the rainforest. It was serendipitous I would end up in Costa Rica in college, able to see some of the flora and fauna I had only read about as a child. 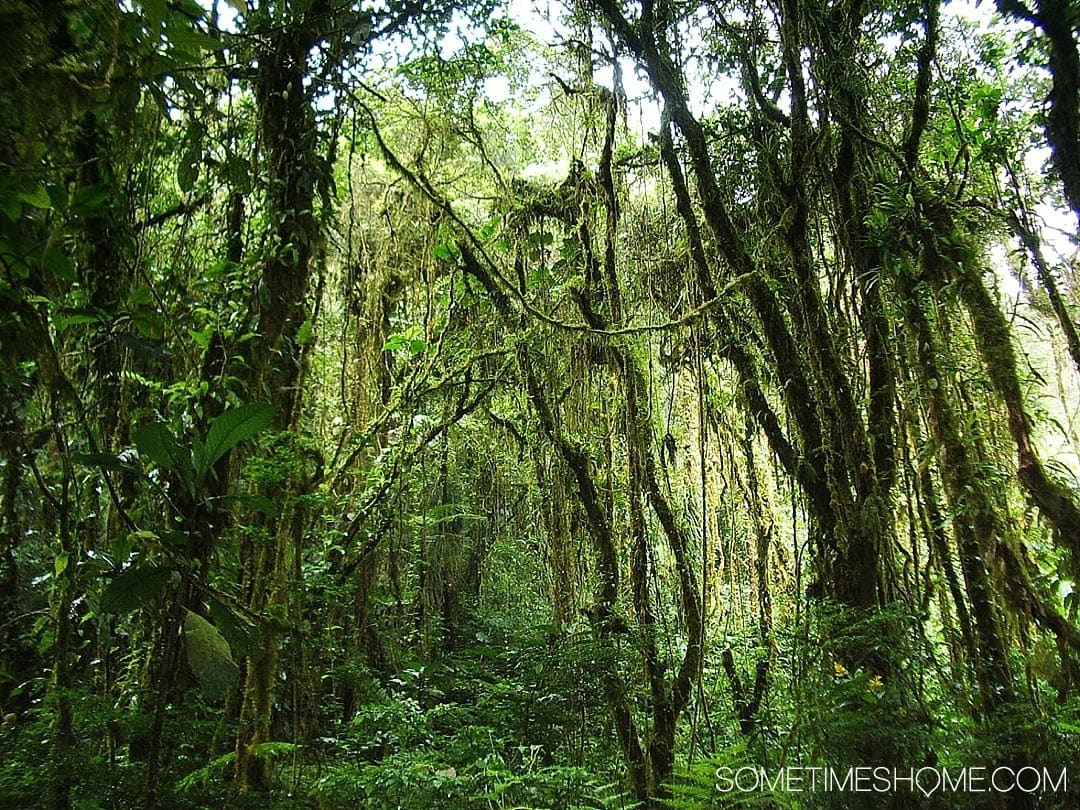 We were there during June, July and August, which is part of the rainy season. It certainly rained a bit each day though it wasn’t anything terrible. As washing machines and dryers, especially, consume a lot of energy clothes are often washed then hung to dry. It was funny our clothes seemed to never fully dry this way; the dampness in the cloud forest, rainy season air never allowed it.

There is a little bit of a bohemian vibe in Monteverde’s town center, which is called Santa Elana. The people are really friendly, the town’s very walkable and the scenery is wonderful in the area.

Directly across from Monteverde Institute is Quesos Monteverde, a delicious cheese factory. There were many days we would take an afternoon work break. I have great memories of enjoying ice cream from their shop or blocks of cheese a friend would cut up for everyone with his pocket knife.

Falling in Love with Costa Rica

You notice you start to feel cozy and at home in this magnificent town. Overall I was incredibly grateful for the experience of studying abroad in Monteverde, Costa Rica.  I recognized this while I was there and even more so afterwards. I’m such an advocate for visiting this country whether for a few days or extended period of time.

It’s incredibly diverse with beaches on the coast and rainforests in its mountains that will leave you speechless. The animals are colorful and exotic, the food is delicious and people are warm and welcoming. Their “pura vida” motto, or “pure life” is representative of the stress-free lifestyle Costa Ricans exemplify.

I’m so glad I wasn’t given a choice in locations of where to study abroad because I certainly would have missed out on all this awesome country had to offer.

Did you study abroad? Let us know in the comments below!