Between great food, medieval walls, nearby towns, and beautiful squares there are so many things to do in Piran Slovenia.

Eating grilled calamari with a view of the dreamy Adriatic sea was the perfect final destination for our week in Slovenia. The turquoise water crashed against the rocky coast as I snapped photos with the perfect glimmer of lens flare from the sun. It was heavenly.

Get Your Bearings in Piran, in Tartini Square

Tartini Square is the perfect spot to get your bearings in Piran. It’s the most famous location here and is named after Piran’s most famous resident, Giuseppe Tartini, who was a famous violinist and composer.

The plaza used to be a harbor but was filled in with sand in the 19th century to build the ellipse-shaped area visitors presently see. It was once a turnaround for a trolley that ran between nearby coastal cities but went through renovations in the mid-20th century that created its present design.

Touring is hardly ever ideal when it rains, of course, but it was really fun to take photos of Tartini Square at night filled with precipitation. The reflection of the lights on the stone was beautiful.

Venice ruled the city for quite some time so if the architecture reminds you of this legendary Italian locale, that’s why! There are two things in particular here that most emulate Piran’s Venetian history:

From Tartini Square you can walk:

You can also sign up for a walking tour, with a stop to enjoy some Slovenian wine included if you want an expert to walk you around the square and other key spots in Piran. We have found that a guided tour is the best way to get the most out of your visit; learning about the history of an area you’re walking around truly solidifies its historical significance no matter how large or small.

Watch the Sunrise Over the Adriatic Sea

We had a great view of the sea and Piran marina from our hotel room balcony in Tartini Square. We didn’t have to get up that early to see the sunrise in Piran – it was around 7:00am in November.

It was so peaceful to watch the colors of a painted sky turn blue as seagulls flew by. (Note it can be windy in November, especially in the mornings!)

If you’re into maritime history, you will enjoy visiting the local maritime museum on the harbor. The building it is housed in, Gabrielli Palace, was constructed in the 19th century. It’s steps away from Tartini Square and has an archaeological collection from the middle ages to WWII.

It also has additional local historical information, like regarding the history of salt panning in Slovenia, and shipbuilding in Piran. It truly helps put Piran in context for its geographical history.

It’s closed Mondays, and only costs €4 per adult.

Sail to Venice from Piran

If you took a drive to Venice, Italy from Piran, Slovenia it would take you two hours and twenty minutes to get to. But by boat, it’s only an hour’s ride away because it cuts directly across the Adriatic Sea.

Sign up for a 12-hour day tour that will pick you up from your hotel in Piran, then take you to Venice’s famous St. Mark’s Square by boat (on a catamaran to be exact). After a guide gives you a walking tour of Venice, you’ll have a few hours of free time before you have to head back to Piran.

One of the most romantic things to do in Piran, Slovenia, is rent a boat for the day for less than $500. You can bring a group of up to 10 passengers, or keep things romantic with you and your partner.

A private captain will sail you around the Slovenia coast on a vintage wooden boat, where you can sunbathe, enjoy drinks on the top deck, or watch the sunset with wine, cheese, and other assorted snacks they provide. This will surely prove to be one of the most memorable things you do during your time in Piran.

Seafood is one of the main attractions in Piran. It is, in fact, a city on the ocean! We loved trying whole grilled Branzino (it’s like Sea Bass), grilled calamari, and even langoustine-topped pasta.

One of our favorite little restaurants was Fritolin pri Cantini in Maj trg, the sweetest little hidden market square. The restaurant was no fuss, family-owned, affordable, and delicious. You can get food to go at the window shown below or sit to eat at their restaurant, whose door is to the right of the service window.

If you love food tours like us, sign up for this E-Bike Food Tour. It’s about 5 to 6 hours and takes you through the various port towns in and around Piran. It even stops at the Salt Pans…we love salt!

There’s also a well-known street along the coast named Prešernovo nabrežje where we got this pasta below. We preferred the restaurant above because it was less touristy and was more affordable than the one below. But we had a few meals in Piran so we diversified our locations. 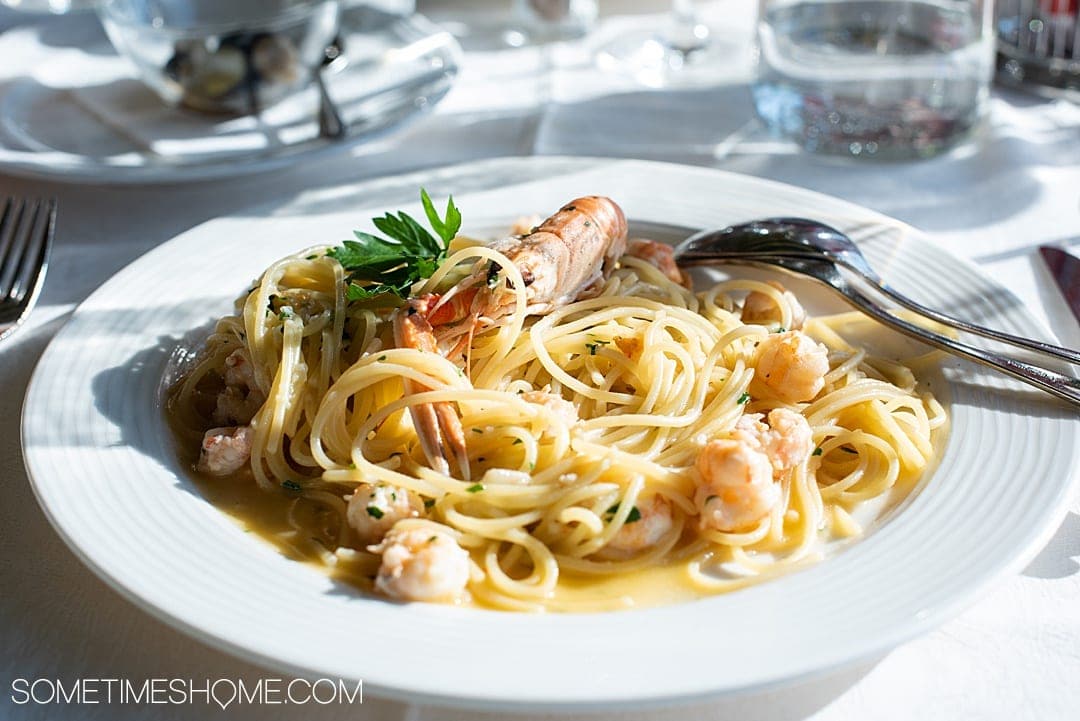 See the Walls of Piran

We hiked to the Walls of Piran one morning, which took our breath away in two ways:

The construction of the walls dates back to the 10th century. They literally grew in length under Venetian rule and medieval times during the 13th century as the city flourished and defense became an increasing concern.

There is a turnstile you need to pass through in order to walk onto the property and climb the wall stairs. If it looks closed try to go through anyway. We saw someone attempt entry, though not with enough energy, and move on after thinking it was closed. What a shame for him because we tried and got through easily. It was worth climbing for views like this:

You can see the Walls of Piran from a distance (close to St. George’s Parish Church, mentioned as #5 in this post) at the top of the photo below. 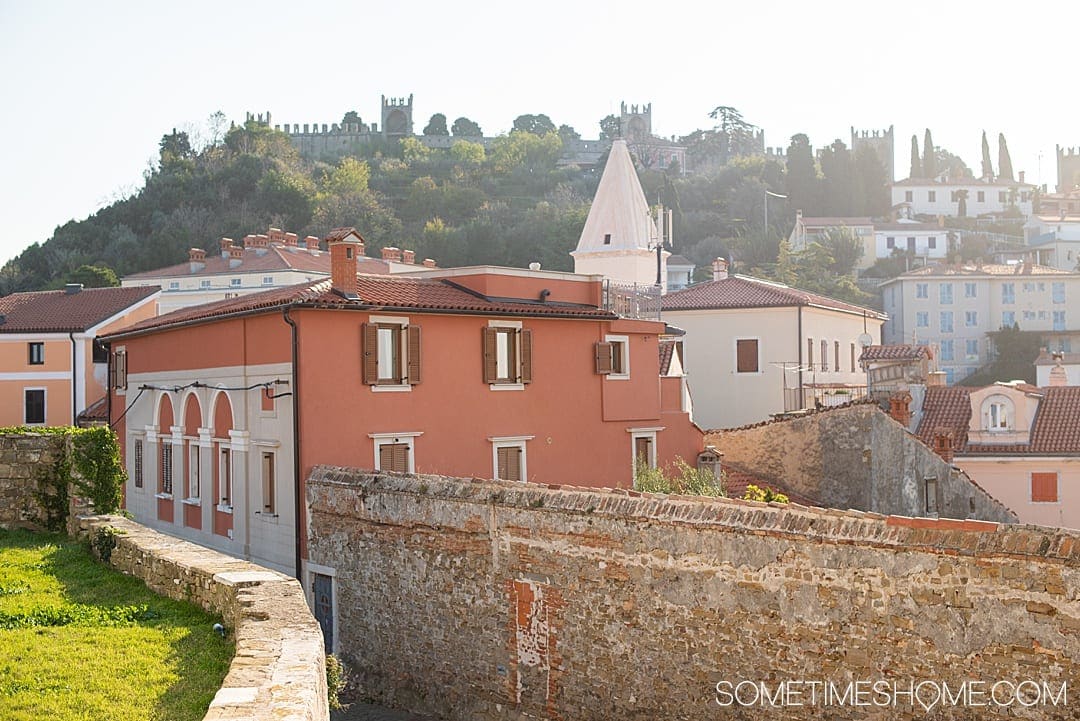 Don’t want to go it alone? Book a super affordable and informative walking tour in Piran and you’ll hit several highlights mentioned in this post and then some.

European churches may be a dime a dozen but this church is worth putting on a list of things to do in Piran. Its interior is really pretty. We recommend visiting to take a peek at its restored ceiling as you walk back towards the town center from the Walls of Piran.

We visited Koper under recommendation from our hotel concierge. It was a cute town worth spending a few hours in. You can’t drive a car through the old town city center, which is kind of nice. Most parts of the historic part of Koper seemed to be pedestrian-only unless you were a resident, construction, or sanitation worker. There was plenty of parking surrounding the town either in lots or on the streets.

We walked around to find shops, had traditional Slovenian cream cake in a sweets store at their food market, and enjoyed wine and people watching.

Unfortunately, a lot of the shops were closed the third week of November, during the off-season when we visited. But we did find a few that were open. We imagine many more are open other times of the year, especially peak season.

We skipped Izola because we didn’t have time to visit both towns. But it’s another popular destination on Slovenia’s coast, just next to Koper. We heard it has a beach and great views of the ocean, an attraction more popular in warmer weather.

Trieste, Italy is so close to Piran. In fact, it only took us 45 minutes to drive between the two. If you don’t want to take a boat ride to Venice, consider a drive to Trieste.

It was cool to say “oh, we went to Italy for a few hours today!” It was as easy as driving from Piran to Trieste. No one stopped us, no one asked for passports (but we had them on us just in case), there wasn’t a gate to go through indicating we were now in Italy. Nothing.

We saw the incredible Miramare Castle, ate pizza, and walked around for a few hours. It was worth the five hours we were in Trieste, Italy for a day trip.

There are two caves you can easily reach from Piran:

We sort of regret not going to Postojna Cave because Predjama Castle is there and we heard good things. However, we only had half a day for a cave tour so we went with Škocjan Caves because it’s a tad closer to Piran and we could see it in less time.

(Seeing Postojna Cave and Predjama Castle would have taken up more time than simply seeing Škocjan Caves did. We also fulfilled our castle desire when we were in Trieste and visited Miramare Castle.)

Our tour guide pointed out staircases and passageways the original explorers built. It was through this and the cave museum exhibits that we learned about the history and exploration of the cave.

Arrive 15 to 30 minutes earlier than your tour time to read about the caves’ history in their on-site museum.

It was here that we also learned the main difference between the two popular caves in the area: Škocjan Caves has a cool river that runs through it. Postojna Cave doesn’t. And the river inside was pretty cool! (You’re not allowed to take photos inside the cave but, truthfully, they wouldn’t come out so great anyway.)

If you don’t have a car or want a guide, we recommend booking a cave tour: 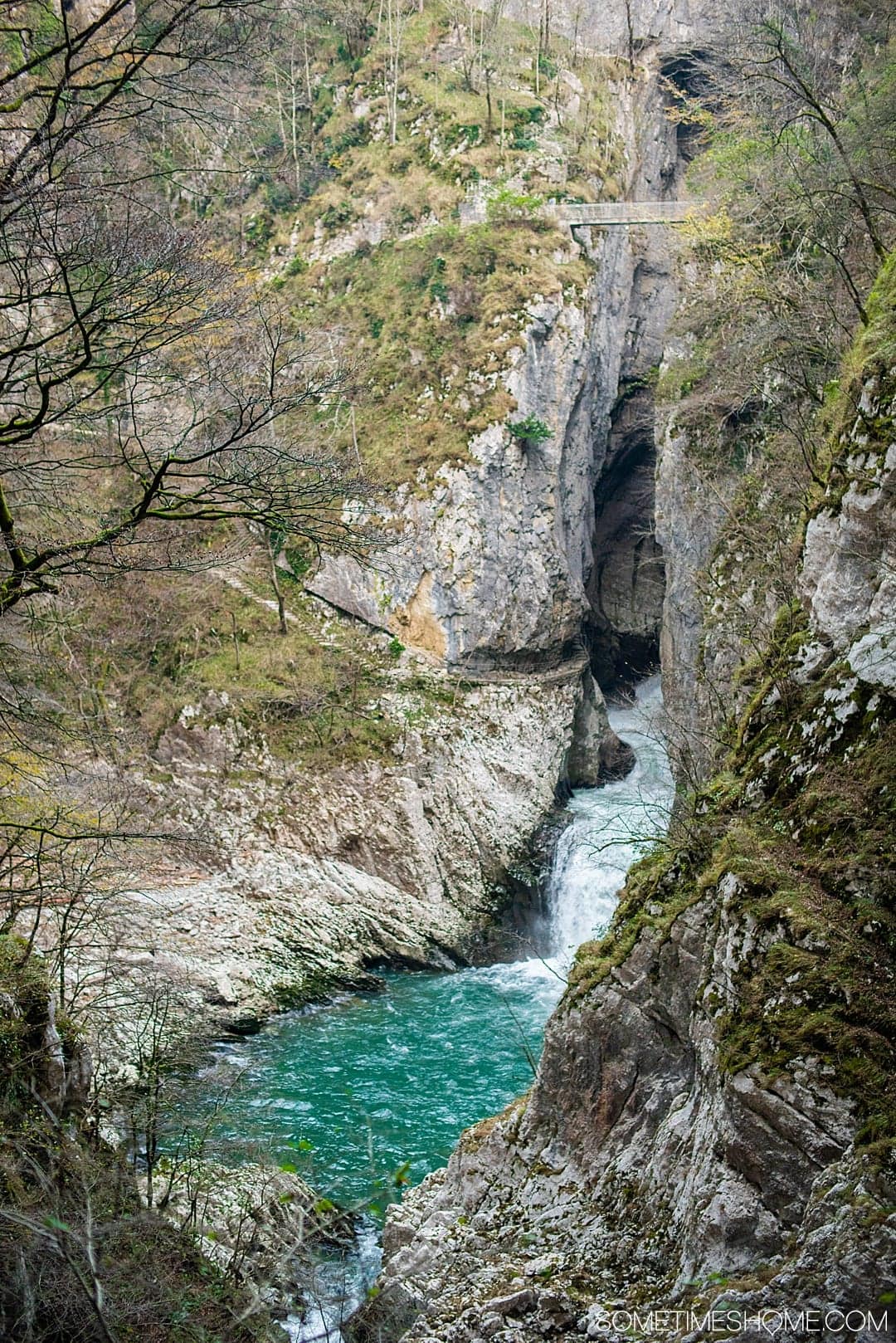