I went to this nearby nearly blind, not knowing what to expect. Nevermind the sites and great things to do there outside of cuisine, but I never thought I’d find myself amidst so many wonderful food options and restaurants in Goldsboro, NC. It’s foodie destination on the rise in a town close to home; it’s just about an hour southeast of Raleigh. Whether you’re a veggie lover or steadfast carnivore, there’s something for everyone.

Barrique’s website states it’s a place for “Steak, Wine & Whiskey,” but that’s just the tip of the iceberg. We had a lovely dinner on the second floor of their two-story restaurant. Its lighting is warm and space inviting. I admired the poured concrete bar and glow of market lights as we talked to friends and enjoyed cocktails.

Carrie and Eli, Barrique’s owners, moved from Ohio to Goldsboro and fell in love with the downtown area. They decided to restore a space and bring its historic integrity back to its glory days; their restaurant is the result of the TLC they put into the project. It was hard to believe it had only been open two months when I ate there. It already seemed like such a community staple!

My favorite menu items I tasted were the risotto and Brussels Sprouts, cooked perfectly! There’s visual beauty in all the dishes they present whether chicken, steak or macaroni and cheese…but they taste wonderful too. It’s a great destination for a family dinner, drinks with girlfriends, or a romantic date. 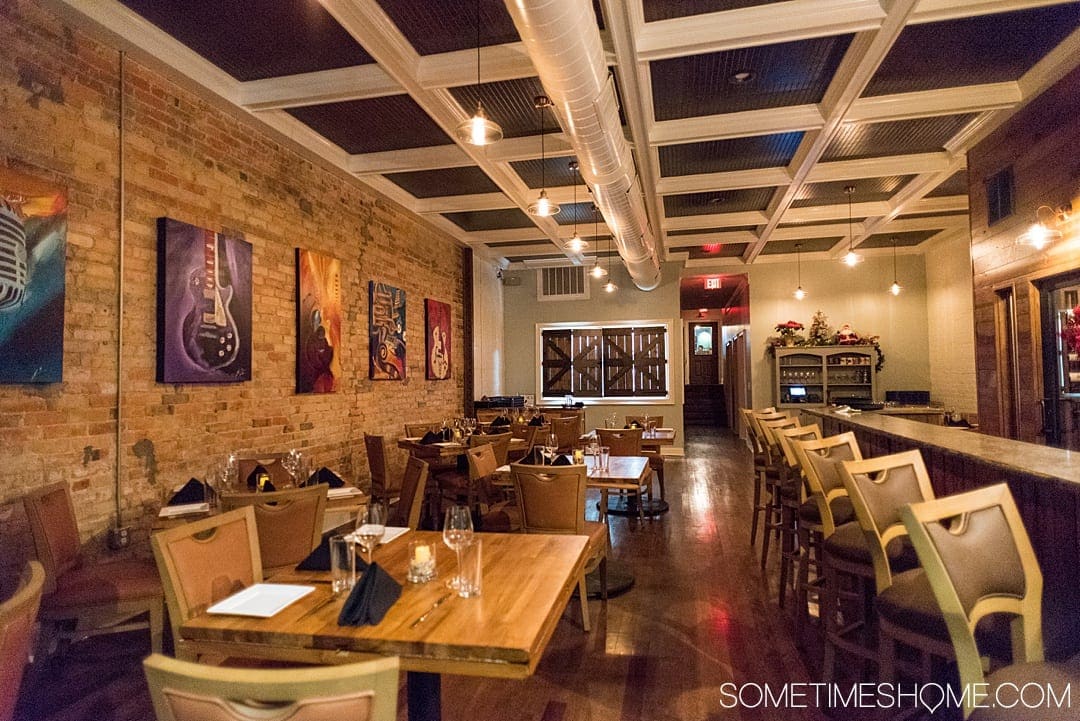 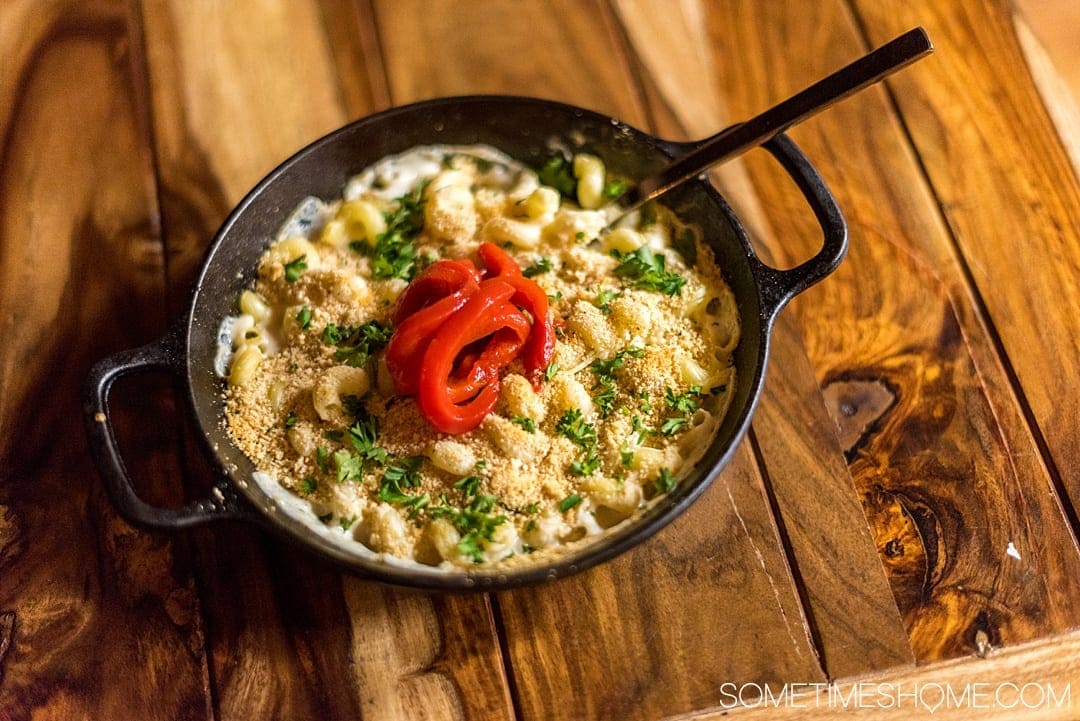 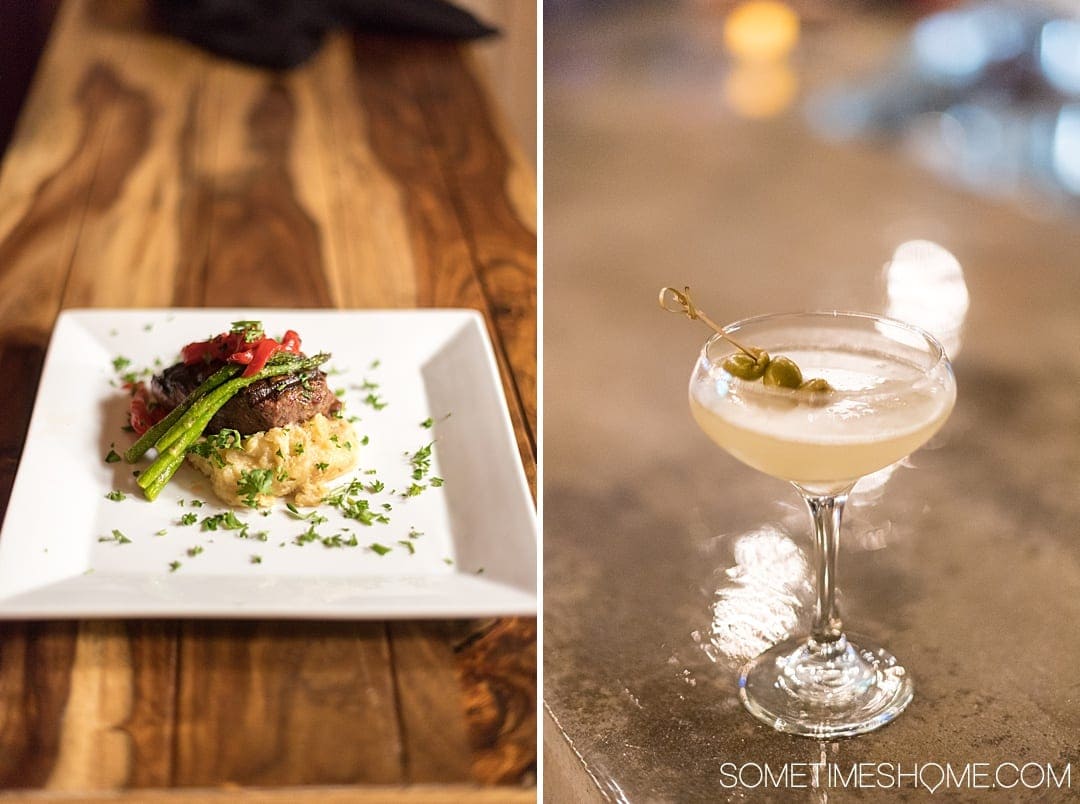 I love good sushi so I went here for lunch and ordered a miso soup and a maki roll. I was satisfied but I have to admit it wasn’t the best I’ve had. However, the good news is after my visit I learned from locals I potentially ordered wrong!

I found out they’re known for Korean food. Seymour Johnson Air Force Base is just miles away and I learned a lot of the Air Force members have been stationed in Korea. Thus they seek out Korean food. Jay’s owners are Korean and they most certainly know how to do their cuisine right!

The restaurant is downtown and has a relaxed vibe. It’s a great option if you’re in Goldsboro and looking for a chill restaurant with a good atmosphere and outdoor seating. 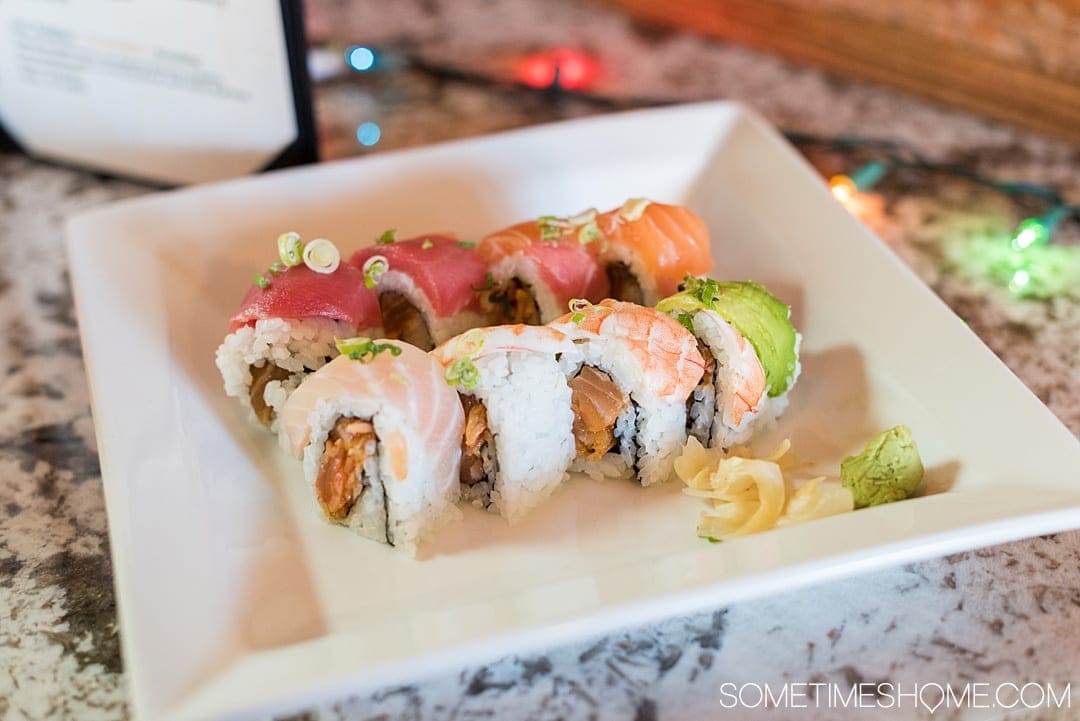 Every time I hear there’s Peruvian food where I’m visiting my ears perk up! Peruvian food is always packed with flavor and a touch of love in its creation.

We had takeout during a tour of the Seymour Johnson Air Force Base and were each presented the same meal. That was a-okay with me because it was phenomenal! I’m not normally a big chicken eater but this meat was so moist and delicious I couldn’t stop eating it. It was served with a side of rice and vegetables with a touch of citrus on top of the broccoli, squash and cauliflower mix. I gobbled it up.

They’re open every day of the week and it’s a pretty casual place. (We passed the restaurant driving through Goldsboro.) Be sure to stop by for a meal or takeout. 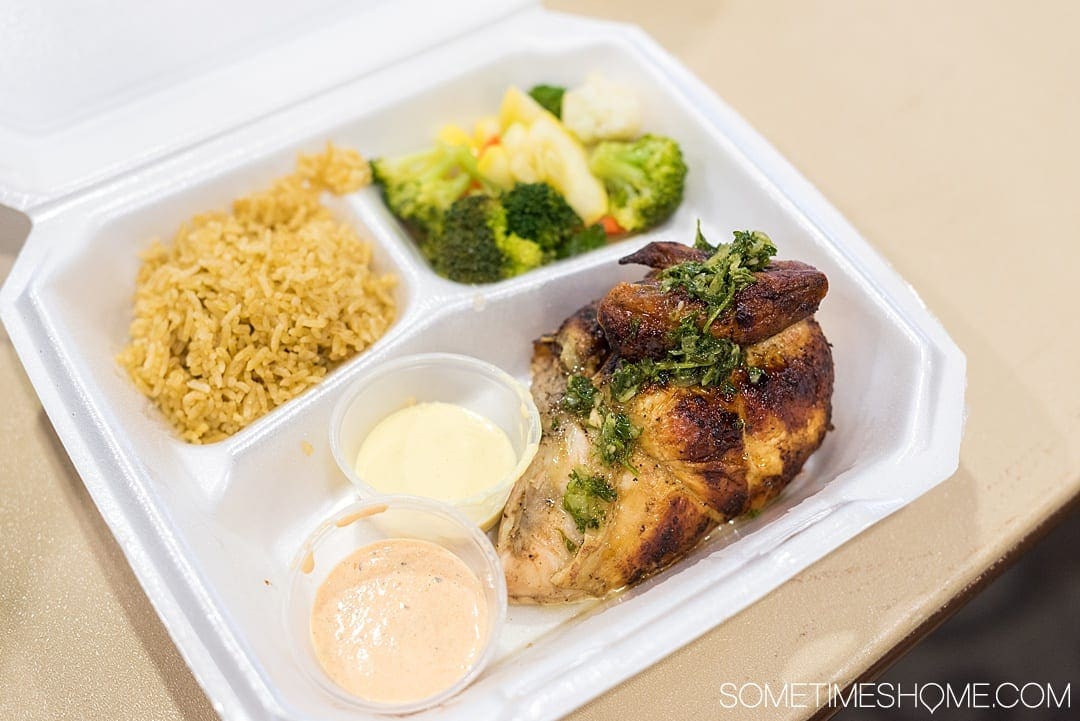 This is the second longest standing bakery in all of North Carolina. They opened in 1946 and have sustained so much over the years, rising (no pun intended) to face each challenge going on in the world to stay in business. Their donuts were delicious – and I don’t normally label donuts as such. They weren’t too sugary, too heavy or too artificial tasting. They were just right. 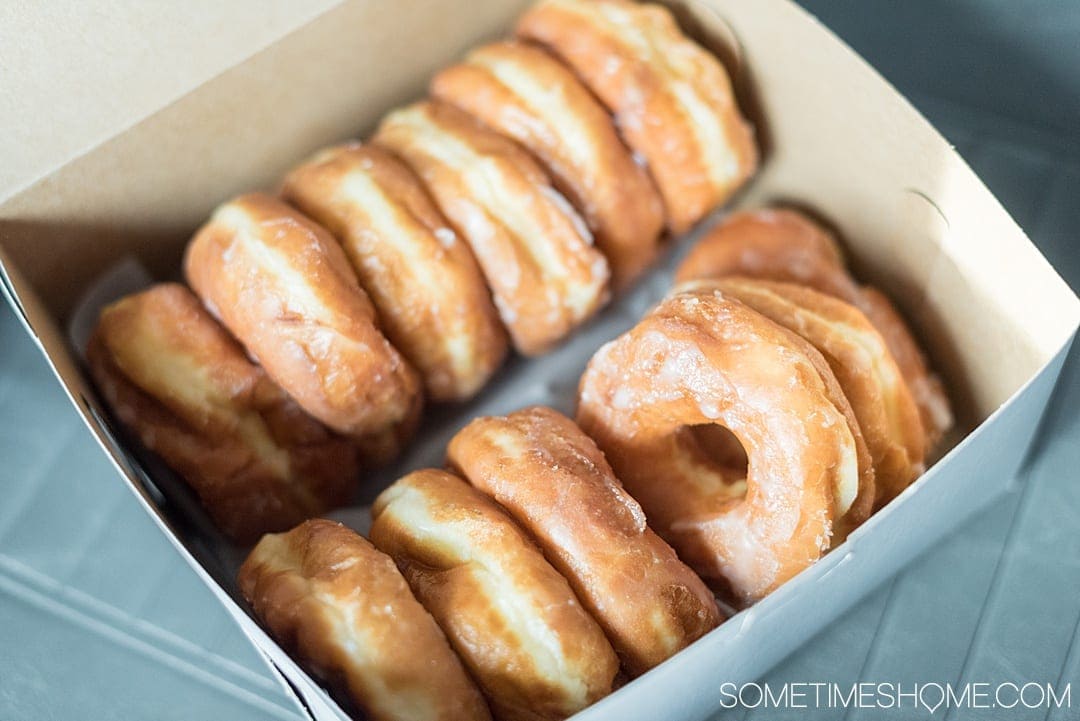 Two people recommended B&G Grill to me within 24 hours of being in Goldsboro. I looked this popular place to eat up online that evening and saw it was cash only. “Oh man,” I thought. “I never have cash!” But as fate would have it I opened my wallet and saw some money. Then I thought “Hmm….but I only have 8 single $1 bills…” So I researched their menu, saw their affordable prices and decided I was in luck! To say it’s affordable would be an understatement.

I drove to this excellent breakfast restaurant in Goldsboro NC on a weekday at 8:00am and expected there to be a few other diners.  Yet I was amazed at how packed it was when I arrive. I was able to get a table. Next a waitress stopped to ask if I needed a menu. This, to me, was a sure sign they have many, many regulars who are loyal to their breakfast orders at B&G and do not need a menu.

I sat there awaiting the arrival of my savory meal and felt the warm energy of the people surrounding me. There were families, co-workers, husbands and wives all enjoying meals together. And guess what? I was the only person I saw glancing at electronics, like my phone and camera. (Give me a little credit! I was taking photos to report back to you on restaurants in Goldsboro NC!) People were engaging with one another like humans used to do, back when the restaurant was established in 1977. 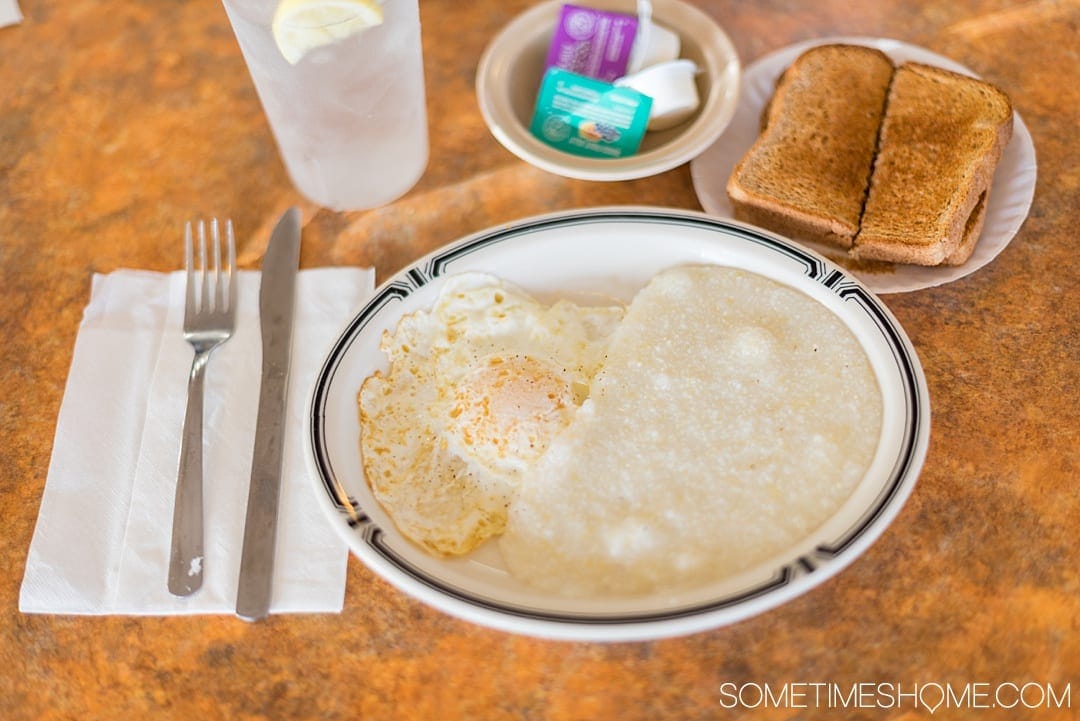 You can’t get much more hometown or affordable than B&G Grill. I decided on simple favorites: an egg cooked over medium with grits and toast. Everything was perfect. It seems like they’re such simple items to cook right but I can’t tell you how many times a simple egg is overcooked or toast is burnt, or grits are way too creamy. Everything was just right though.

I’ve heard they’re also known for their chicken salad so if that’s your thing and you’re there for lunch be sure to try it! Next time I visit I definitely want to try a slice of their homemade pie.

Drinks from Milkshakes to Brews and Beer in Goldsboro NC

There’s lots of great food in Goldsboro but also yummy beverages! Here’s some of our favorites…

This store has food and drinks but since I had a milkshake there it’s fair to categorize it under beverages! (Their food is mostly grocery style.) They have so many fun North Carolina things, from shirts to hats and socks, but the main reason for my attendance was because I saw a menu ahead of time and their milkshakes. My eyes locked with the “Moon Pie Milkshake” text and I knew I had to try it. It did not disappoint! It’s also a great destination if you like shopping for yourself or for gifts for others. Heritage Farms General Store has a little of everything for adults and children. 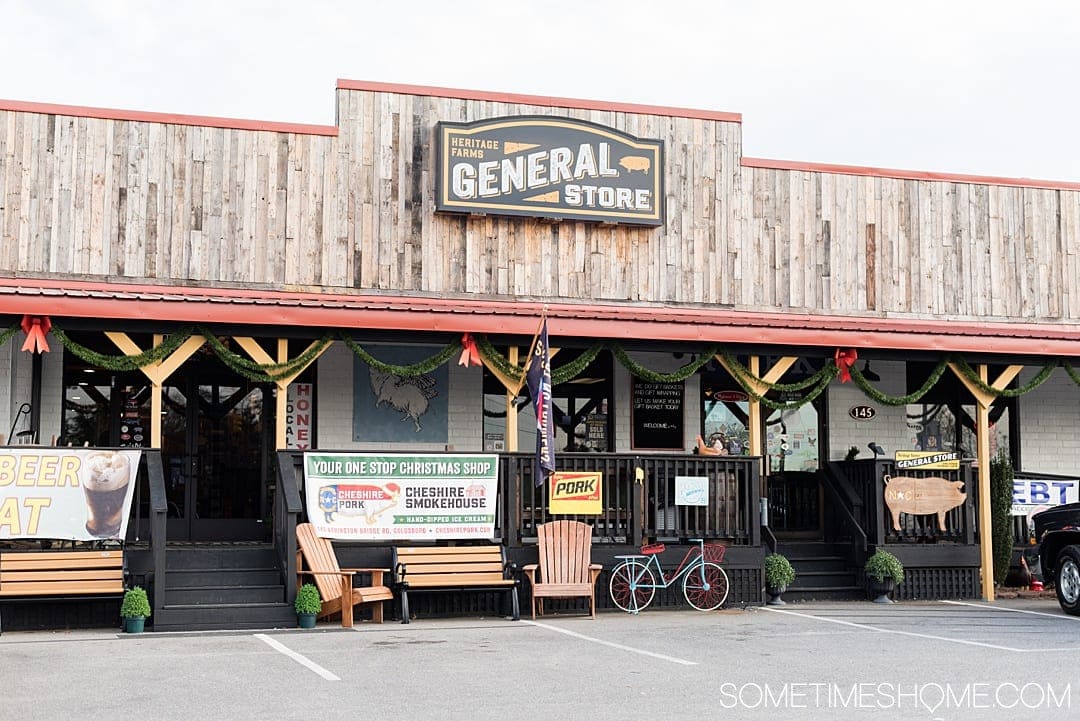 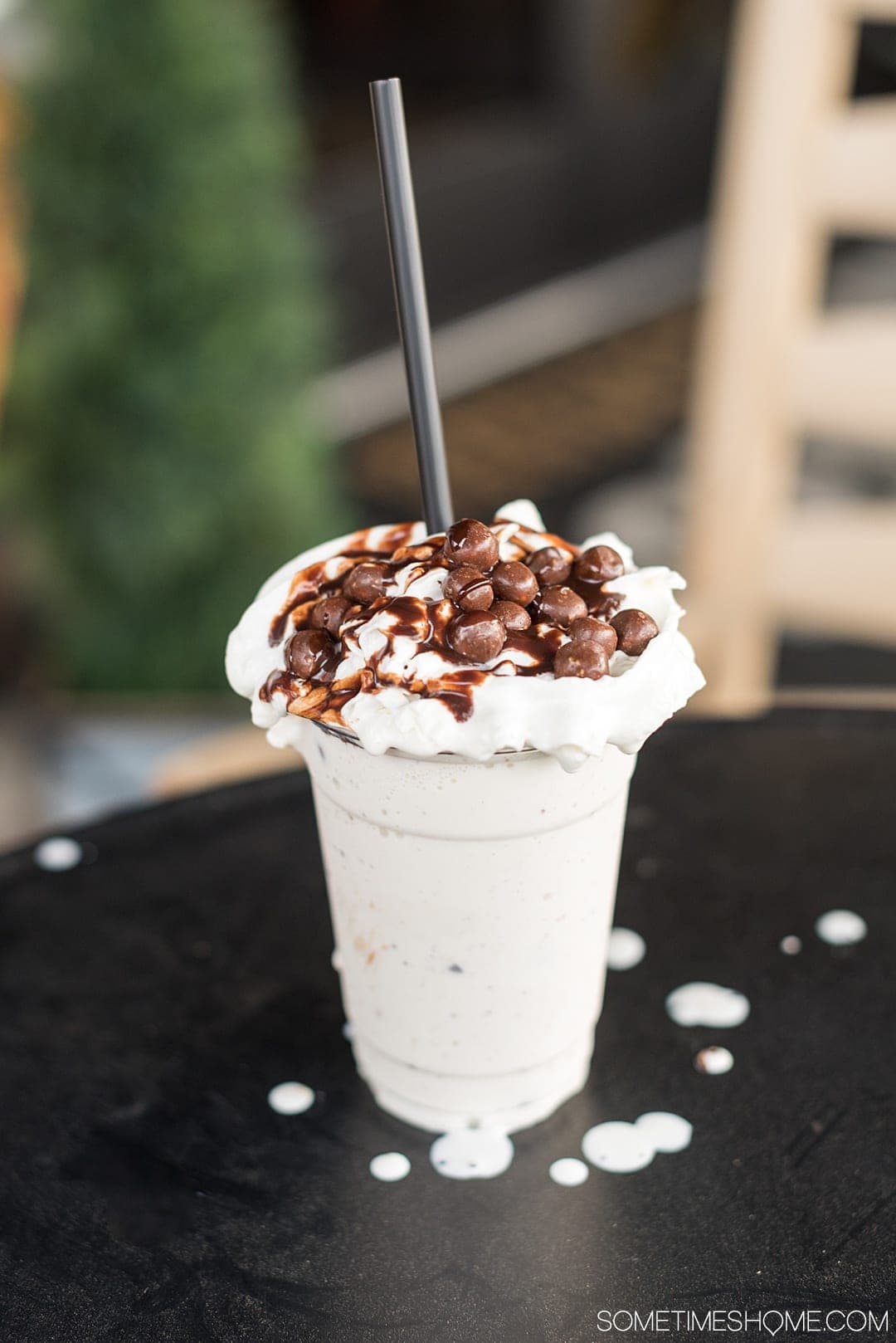 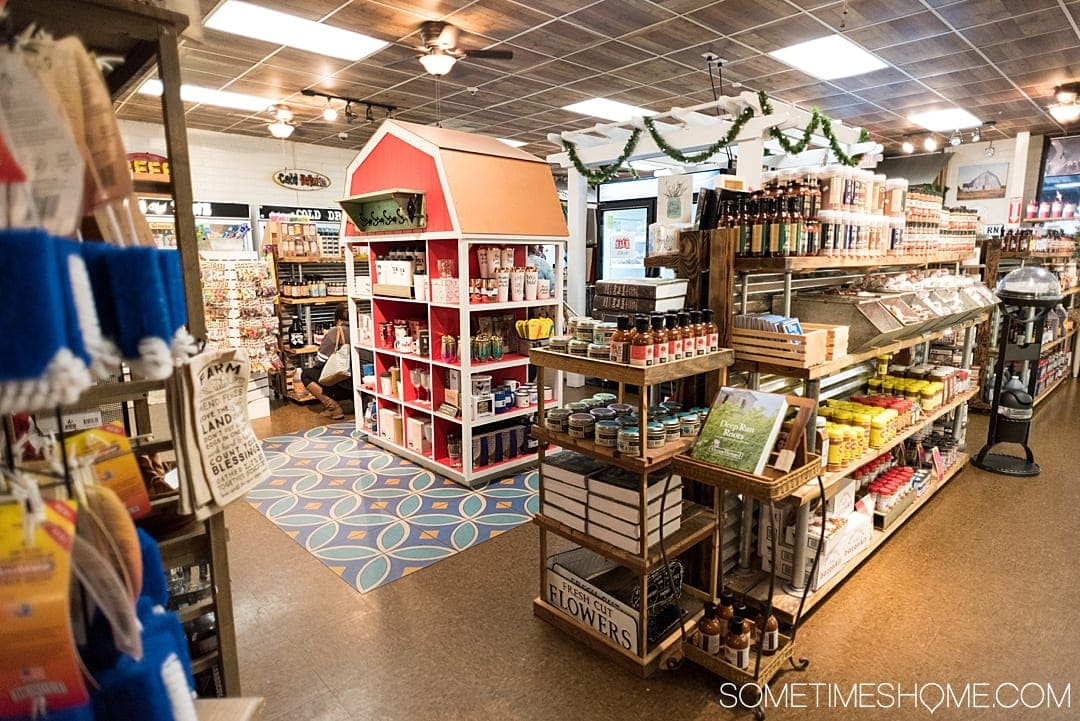 The unique thing about Brewmasters is that they serve food in addition to beer, which is unique amongst beer businesses in Goldsboro. We met their owners who were sweethearts, and I enjoyed learning you can hire them for events too! The parking lot in front of their restaurant makes it really easy to arrive and balance your alcohol with food. (Please drink responsibly!) 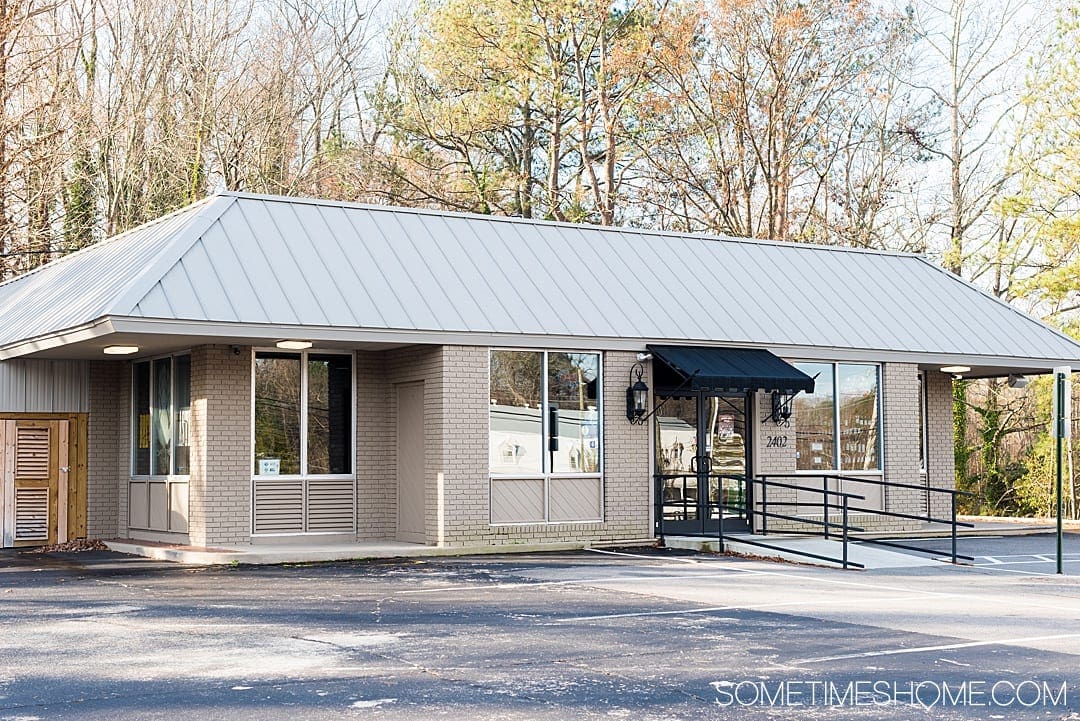 An ex-Air Force Member opened Goldsboro Brew Works with his wife and, as we learned, it was an instant hit. We met someone while touring Seymour Johnson Air Force base who said he loves going there partially for that reason! And I loved it for that reason too but also the great beer. I ordered a flight and asked for North Carolina wheat beers and stouts so I could support local. They didn’t disappoint! 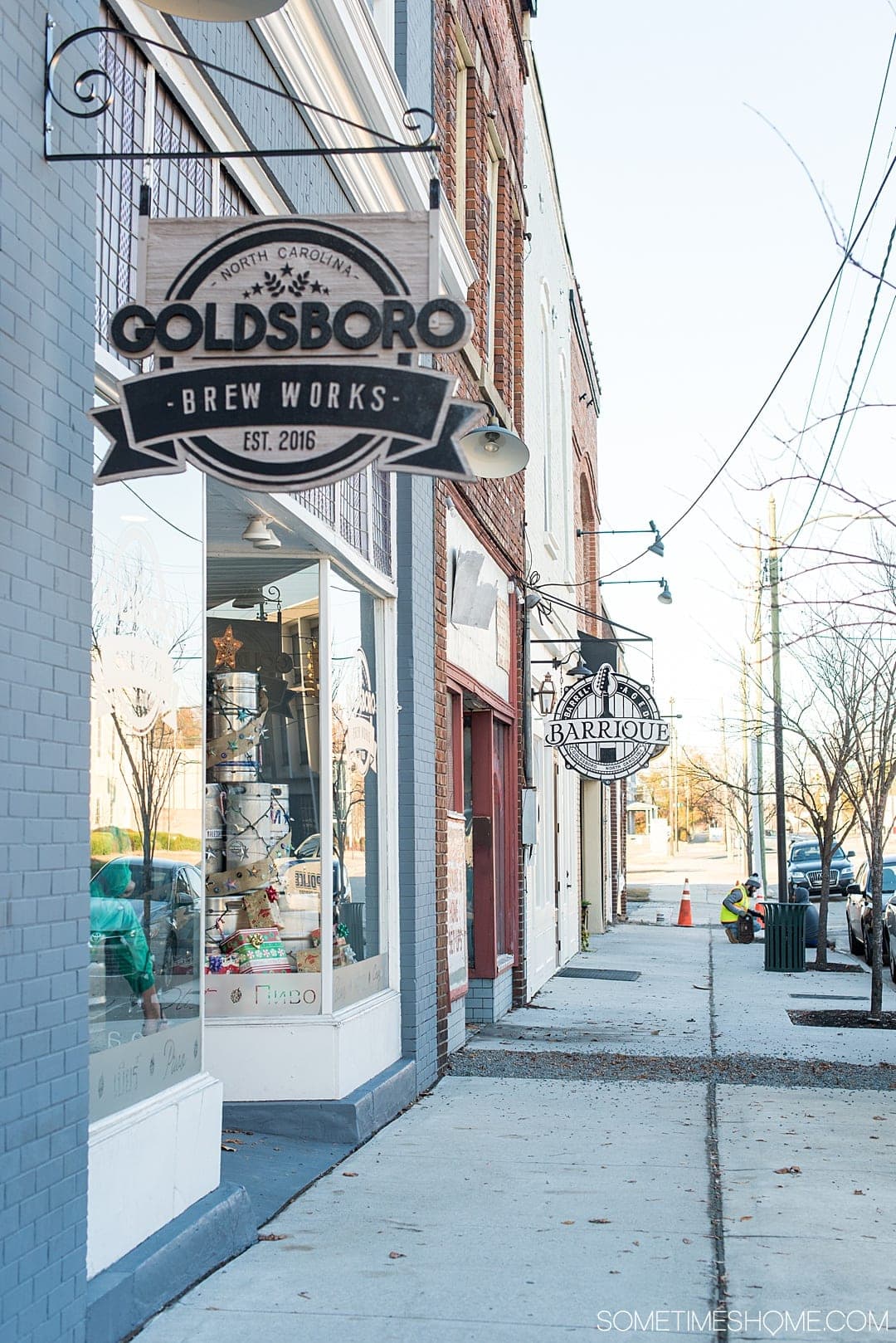 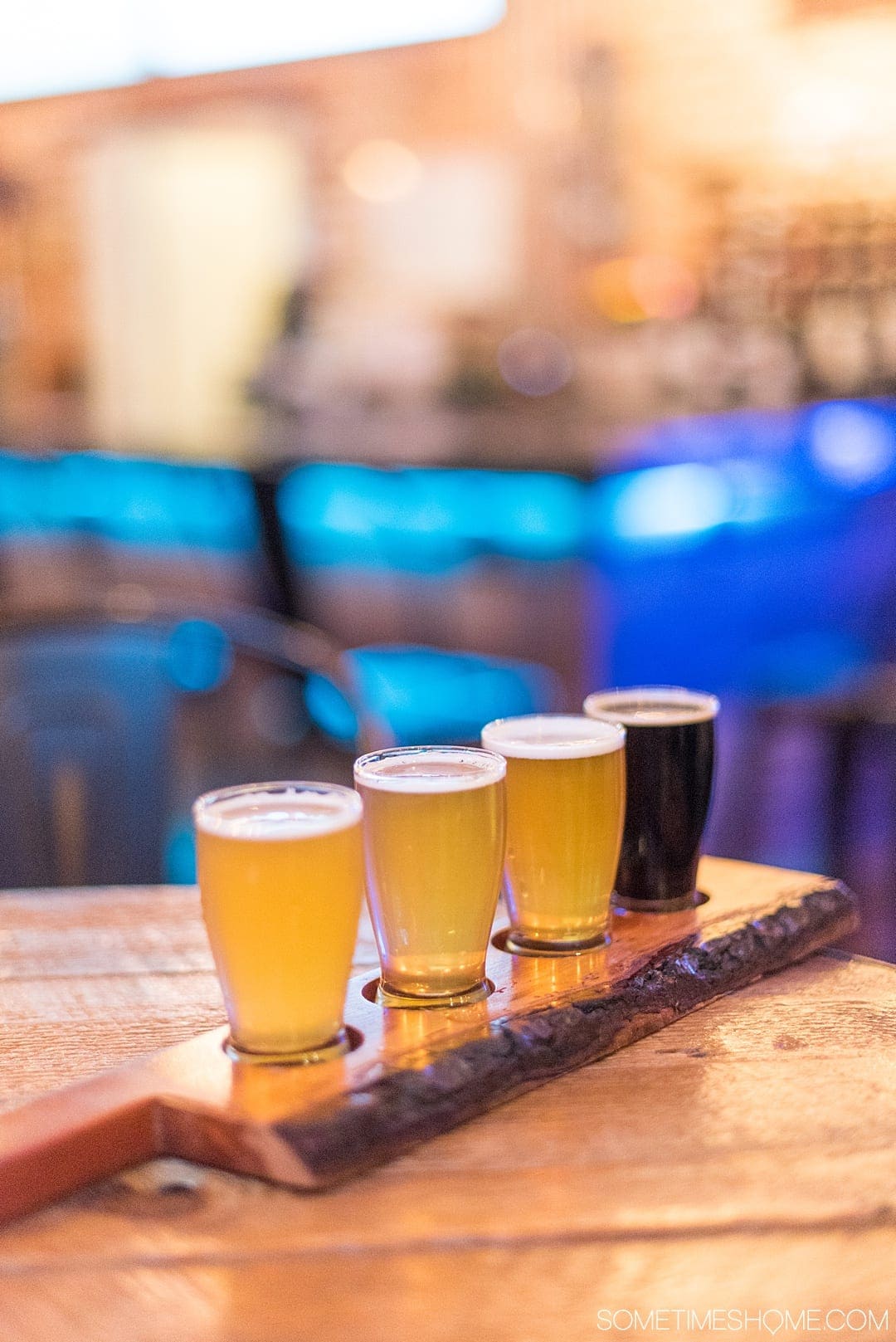 Be still my mural-loving heart! We walked in and my eyes immediately went towards the mural at the back of the space. Secondly, I saw the great selection of beer and wine before me. Goldsboro’s first craft beer store has a selection of local and international beverages, as close as North Carolina and as far as Japan. This Veteran owned shop has a bar where you can enjoy draught beer and purchase small gifts like unique bottle openers as well.

I loved that they had a selection of seasonal beers like a Santa IPA in December. Or if beer isn’t your thing you can get some wine or sake instead! They have options, people! 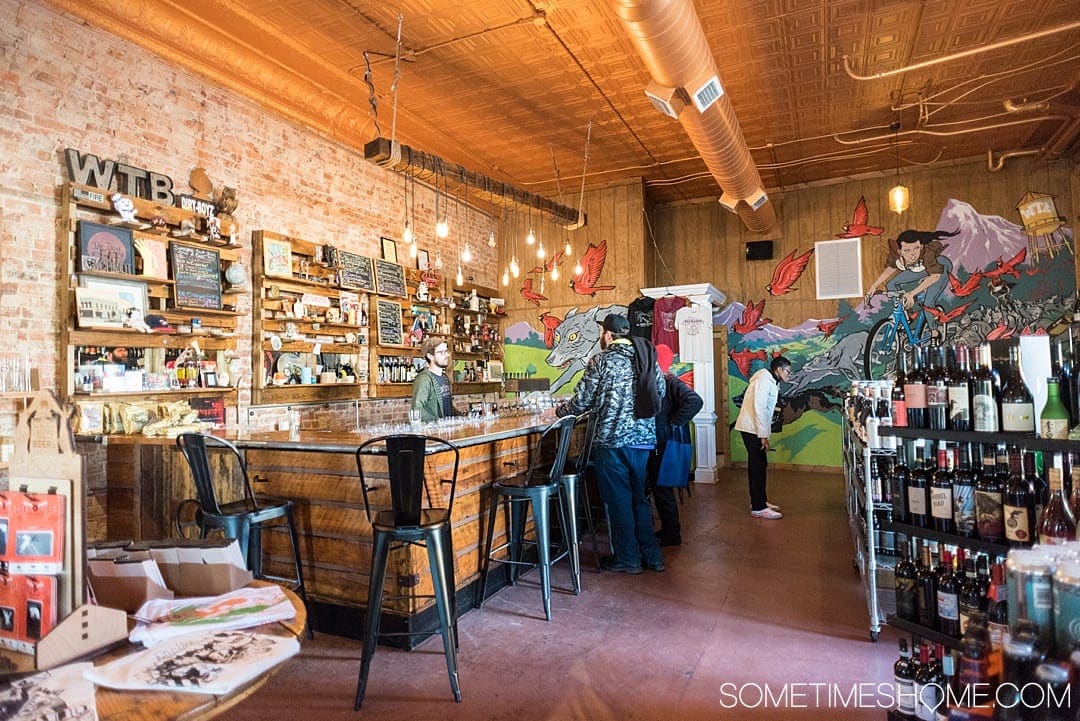 I’m envious Goldsboro has this unique shop in their downtown area. I grew up around the smell of good cigars because my father is a cigar smoker. I despise cigarette smoke but there’s something alluring and satisfying about cigars. As soon as I walked into Tobacco and Hops I breathed in the area and let out a sweet sigh. It smells just as I had hoped.

Dustin, the owner of this Goldsboro casual lounge of sorts, grew up going to his family farm where they grew tobacco and cotton. It was originally his great-grandparents (who he never met) and was passed down to his grandparents. After they passed away and left the property to Dustin, he moved to the farm, which is about 25 minutes from Goldsboro in a town called Princeton.  After his grandparents passed away he inherited the property, where he lives with his partner. His father lives on the property too, thus keeping it in the family! 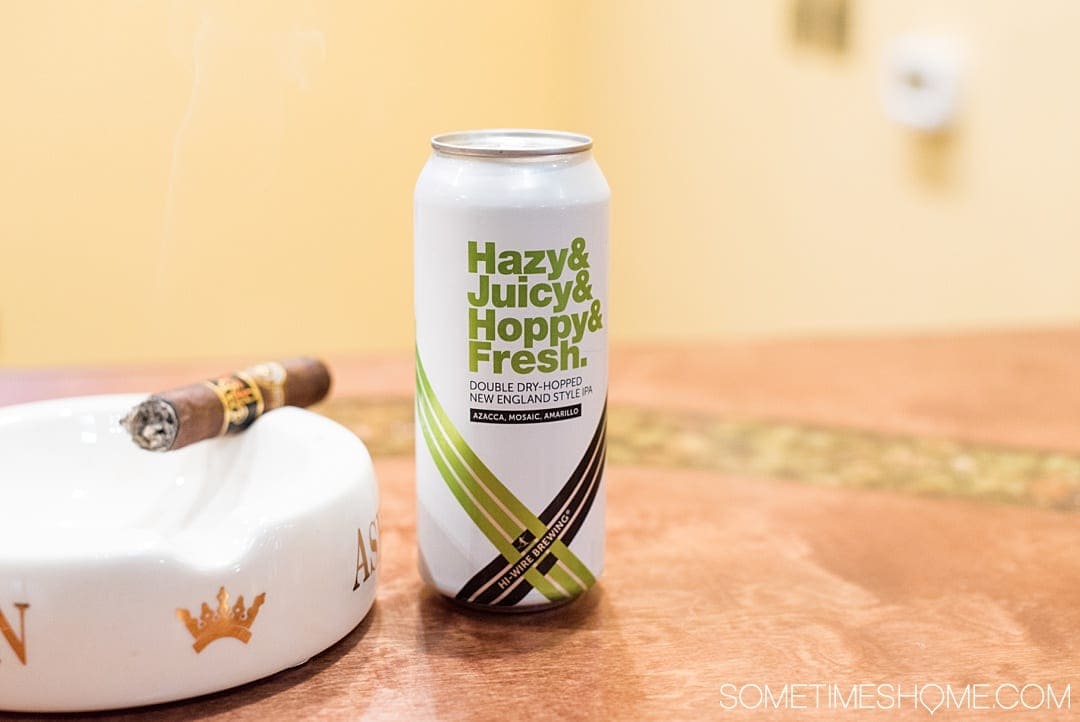 Barbecue is in a category all its own, so we couldn’t resist creating a post dedicated to the delicious BBQ Goldsboro has to offer. But here’s a quick recap to quench your BBQ thirst.

If BBQ had a sugary soul, Mrs. Grady would be it. Her BBQ was by far my favorite of the three we visited. We were there at 10:00am (because BBQ time knows no bounds) and I adored her bright smile and welcoming demeanor. You feel like she’s welcomed you into your home – and I’m willing to bet she spends more time at her restaurant than her house. Her sides were wonderful and the BBQ not heavy. Which meant we had plenty of room for a lot of everything! 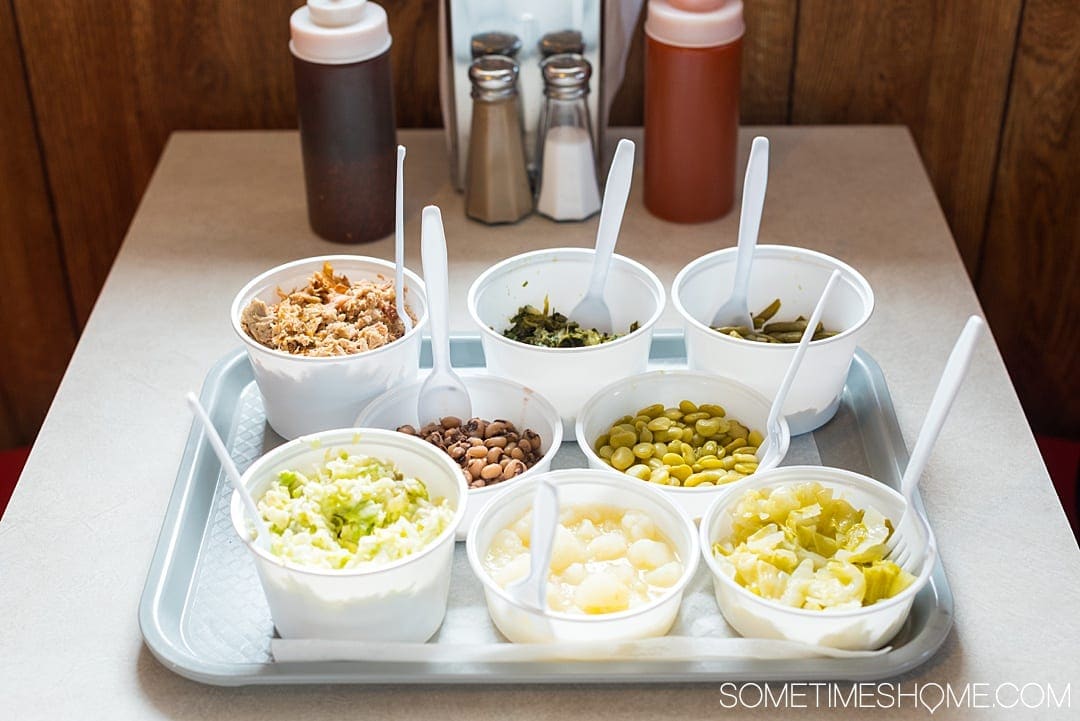 Scott Adams and his family own and operate this true roadside BBQ establishment. It’s a place to eat in Goldsboro right off the highway and even though we circled back around to it the third day we were in town, I happened to have passed it on my drive to Goldsboro from Raleigh. Their ribs naturally fell off the bone and they had the cleanest, most updated smokehouse we saw all day. A favorite dish was the sliced turkey they offer, but don’t pass up the chance to try their chopped turkey too. And of course their macaroni and cheese (made with so many cheeses I can’t even recall the info Scott shared with us!) and their yummy baked beans. 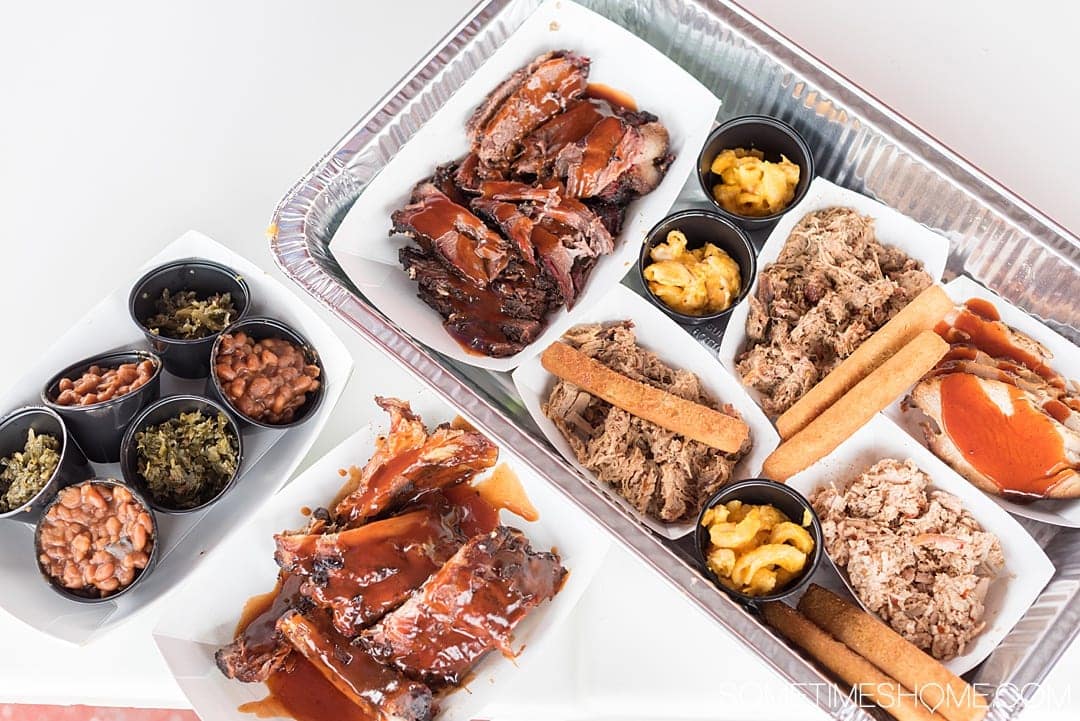 This is a legendary BBQ restaurant in Goldsboro. It had been in business since the early 1960s and Wilber Shirley still visited nearly daily when they closed. (Please note as of March 2019 they closed their doors due to tax issues (we’re sorry to hear that!) but we hope they open again soon so we are leaving them in the post!)

It was great to meet him and taste their vinegar based BBQ sauce. (I love vinegar! Love, love, love!) Another favorite was their hush puppies, which we dipped in chicken gravy. Talk about wanting to just take a spoon to a sauce and go after it! But I thought better than to lose my manners amongst the group we were with. 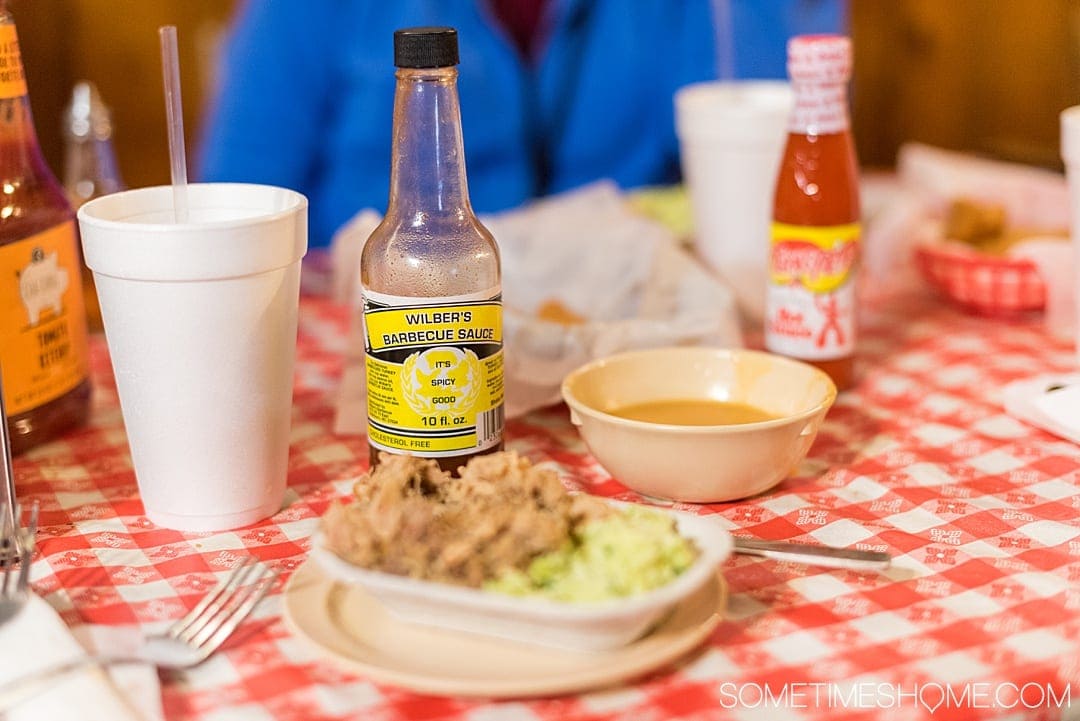 We are excited to return soon to try even more restaurants and food in Goldsboro NC!

Please note: we thank Visit Goldsboro for generously hosting us. We also may make a small commission from affiliate links in this post but all opinions are ours and we bring you genuine content with real facts, photos, thoughts and recommendations. Always. 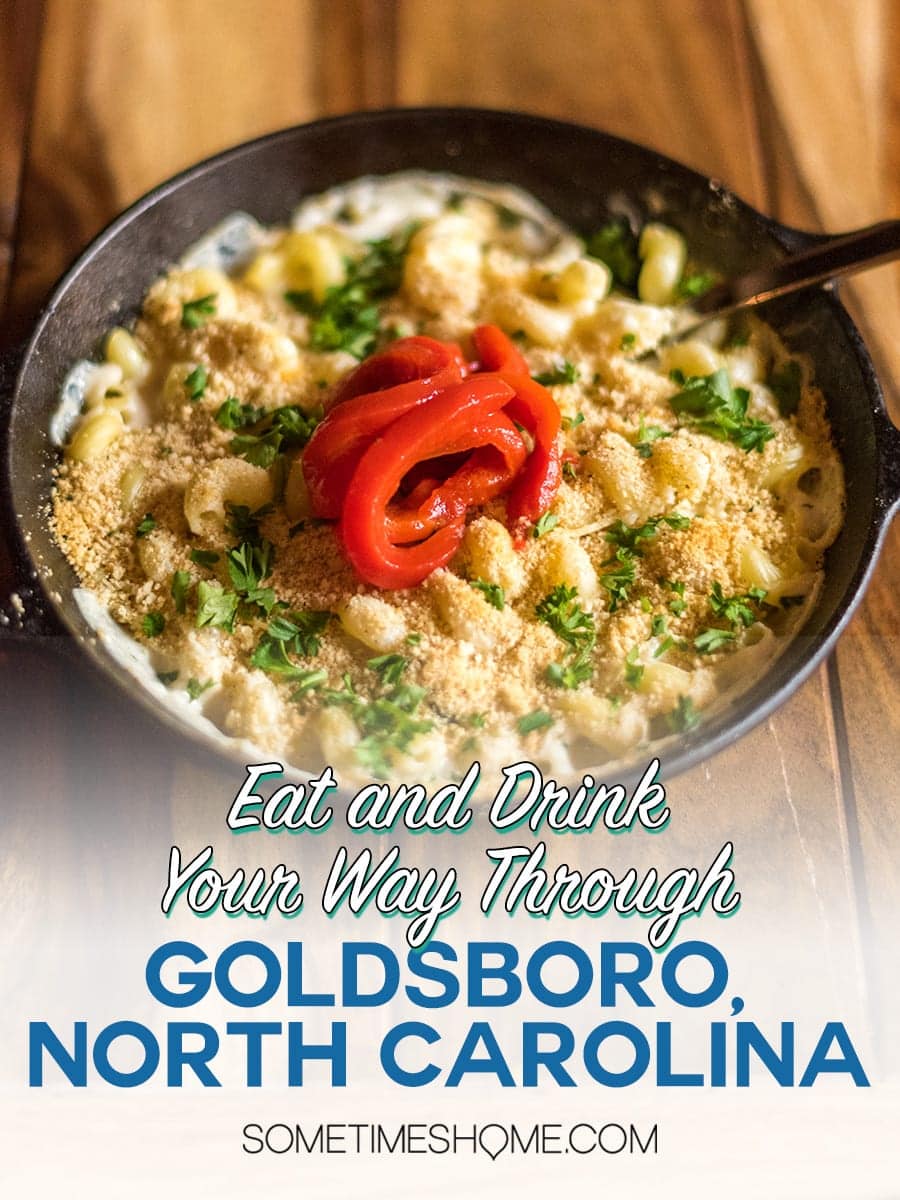